Zeta ® is a representative of a new class of lipid-lowering substances that selectively inhibit the intestinal absorption of cholesterol and the corresponding plant sterols. The Zeta ® is orally active and has an action mechanism that is different from other classes of cholesterol-cholesterol drugs (for example, statins, bile acid sequestrants (resin), acid derivatives of fibrates and plant stanols). Molecular target of ezetimibe is the carrier of sterols Niemann-Pick Cl-Like 1 (NPC1L1), responsible for absorption of cholesterol and phytosterols in the intestine.

The effect of Zete on cardiovascular morbidity and mortality has not yet been demonstrated.

Simultaneous food intake (with a low or high fat content) does not affect the oral bioavailability of ezetimibe, in particular tablets of the Zete ® preparation at 10 mg. Zeta ® can be taken regardless of food intake.

Distribution. Ezetimibe and ezetimibe-glucuronide bind to plasma proteins by 99.7% and 88-92%, respectively.

Absorption and metabolism of ezetimibe are the same in children and adolescents (10-18 years). Clinical application in pediatric practice and in adult patients is limited to 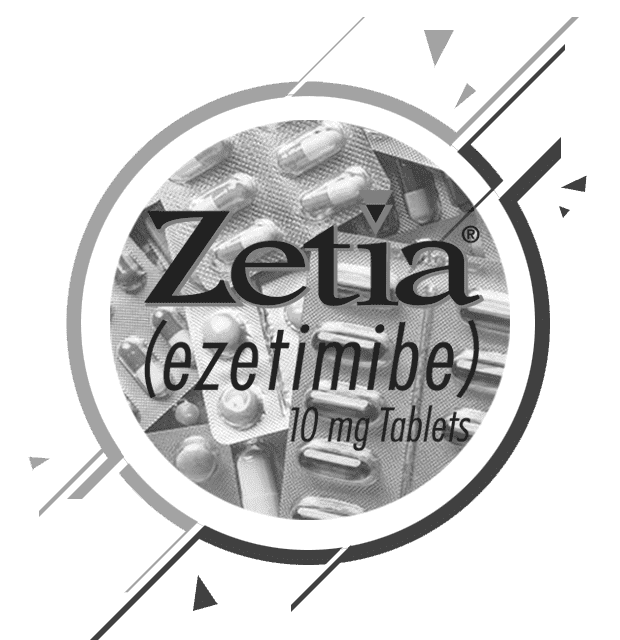 data on patients with GOSG, heterozygous familial hypercholesterolemia or sitosterolemia.

After a single dose of 10 mg of ezetimibe in patients with severe renal insufficiency (n = 8, creatinine clearance ≤ 30 mL / min / 1.73 m 2), the mean AUC for total ezetimibe increased approximately 1.5-fold compared with that in healthy volunteers (n = 9). This result is not considered clinically relevant. For patients with impaired renal function, there is no need for dose adjustment.

One patient in this study (who had a kidney transplant and received multi-therapy, including cyclosporine) had a 12-fold increase in total ezetimibe.

The plasma concentration of total ezetimibe is somewhat higher (about 20%) in women than in men. Decreased LDL cholesterol and safety profile are approximately the same for men and women who are taking Zete ®. Therefore, there is no need for dose adjustment depending on sex.

Zeta ® in combination with a HMG-CoA reductase inhibitor (statins) is indicated as an adjunct therapy for a diet for patients with primary (heterozygous familial and non-family) hypercholesterolemia if therapy with only statins is insufficient.

Monotherapy with the Zete ® preparation is shown as an auxiliary therapy for a diet for patients with primary (heterozygous familial and non-family) hypercholesterolemia, for whom the use of statin is impractical or there is intolerance.

Zetia® in combination with statins is indicated as an adjunct to diet for patients with GOSG. Patients may also receive additional treatment (eg, LDL apheresis).

Zeta ® is indicated as an adjuvant therapy to a diet for patients with homozygous familial sitosterolemia.

Hypersensitivity to the active substance or to any auxiliary substance.

While taking Zetia® with any statin, you should read the instructions of this medication.
Joint therapy with Zete ® with statins is contraindicated during pregnancy and lactation, as well as patients with liver disease in the acute stage or unexplained long-term increases in the level of serum transaminases.

INTERACTION WITH OTHER DRUGS AND OTHER TYPES OF INTERACTION

The study of interaction with other medicinal products was carried out only with the participation of adults.

In clinical trials of drug interactions, ezetimibe did not interfere with the pharmacokinetics of dapsone, dextromethorphan, digoxin, oral contraceptives (ethinylestradiol and levonorgestrel), glipizide, tolbutamide, or midazolane in combination therapy. Cimetidine with combined therapy with ezetimibe did not affect the bioavailability of ezetimibe.

Cholestyramine. When combined with cholestyramine, the mean area under the plasma concentration-time curve (AUC) of total ezetimibe (ezetimibe and ezetimibe-glucuronide) decreased by about 55%. When Zetia® is added to colestyramine, a gradual decrease in low density lipoprotein cholesterol (LDL cholesterol) may slow down.

If there is a suspicion of cholelithiasis in the patient, taking Zetia® and fenofibrate, a screening of the gallbladder is indicated, and therapy should be stopped.

Combined therapy with Zetia® and other fibrates has not been studied.

Fibrates can increase the release of cholesterol in the bile, which leads to cholelithiasis. In animal studies, ezetimibe sometimes increased cholesterol levels in the gallbladder, but not in all species. The risk of stone formation associated with the therapeutic use of the Zete ® preparation can not be detected.

Statins. No clinically significant pharmacokinetic interaction was detected with the combined use of ezetimibe with atorvastatin, simvastatin, pravastatin, lovastatin, fluvastatin or rosuvastatin.

Anticoagulants. The simultaneous use of ezetimibe (10 mg once daily) had no significant effect on the bioavailability of warfarin and prothrombin time in a study involving 12 healthy adult males. However, there have been post-registration reports of an increase in the International Normalized Ratio (INR) in patients to whom Zetia® was added to warfarin or fluindione. When Zetia® is added to warfarin, another coumarin anticoagulant or fluindione, it is necessary to monitor INR properly.

When concurrently taking Zete ® with statins, you should read the instructions for using this statin.

During controlled clinical trials, patients who received the combination of statins and Zetia® experienced a gradual increase in transaminase levels (≥ 3 times the upper limit of the norm). When taking Zetia® with statins, functional liver tests should be performed at the beginning of therapy and in accordance with the statin recommendations.

Post-marketing research reported cases of myopathy and rhabdomyolysis with Zetiyau®. The majority of patients who developed rhabdomyolysis took the statin concomitantly with the drug. However, cases of rhabdomyolysis have been reported very rarely with monotherapy with Zetia®, and in the case of the addition of Zetiyau® to other agents known to be associated with an increased risk of rhabdomyolysis. If you suspect myopathy, which is manifested by muscle symptoms or an increase in the level of CK more than 10 times the upper limit of the norm, you should immediately stop taking Zetiyau®, any statin and any of the other drugs that the patient takes at a time. All patients starting treatment with Zetia® should be informed of the risk of myopathy and the need to report urgently on the appearance of muscle pain, lethargy, or weakness of unclear etiology.

Since the effects of elevated ezetimibe in patients with moderate to severe hepatic insufficiency are not known, the Zete ® preparation is not recommended for this category of patients.

The safety and efficacy of Zete ® with fibrates have not been investigated.

If there is a suspicion of cholelithiasis in the patient, Zete ® and fenofibrate are taken, a gallbladder examination is indicated, and such therapy should be discontinued.

If Zete ® is used against the background of taking warfarin, another coumarin anticoagulant, or fluindione, the international normalized ratio (MNO) should be properly monitored.

Patients with rare hereditary forms of intolerance to galactose, congenital insufficiency of lactase or glucose / galactose malabsorption syndrome should not use this medication.

The efficacy and safety of Zete ®, intended in combination with simvastatin for patients aged 10-17 years with heterozygous familial hypercholesterolemia, were evaluated in a controlled clinical trial involving boys (Tanner Stage II or higher) and girls (at least one year after menarche ).

During this limited controlled study, there was no significant effect on the growth and puberty of boys and girls in adolescence and no effect on the length of the menstrual cycle in girls. However, the effect of ezetimibe on growth and puberty during the treatment period of more than 33 weeks has not been studied.The safety and efficacy of Zete ®, intended in combination with simvastatin at a dose of more than 40 mg per day, patients aged 10 to 17 years, were not studied.

Have not studied the use of Zete ® by patients under the age of 10 years and girls in the first menstruation.

The long-term effectiveness of Zete® therapy in patients under the age of 17 to reduce morbidity and mortality in adulthood has not been investigated.

Use during pregnancy or lactation.

The ability to influence the reaction rate when driving vehicles or other mechanisms.

Studies on the effect on the ability to drive and other mechanical means have not been carried out. But it should be borne in mind that it was reported dizziness when driving a car and other mechanisms.

METHOD OF USE AND DOSES

During the entire course of Zete® treatment, the patient should adhere to a standard lipid-lowering diet.

The recommended dose of Zete ® is 10 mg (1 tablet) per day, regardless of food intake.

When adding Zetia® to a statin, you should continue taking the dose of a statin that has already been prescribed. In this case, you should read the instructions for the use of this statin.

Simultaneous use of bile acid with SECURITY

Zetia® should be taken no later than 2:00 before or no earlier than 4:00 after the introduction of SECTIONAL BILLS.

Older patients do not need a dose adjustment.

Patients with renal insufficiency do not need dose adjustment.

At the beginning of treatment, specialist supervision is necessary.

Children aged 10 years (puberty: boys - stage Tanner II and above, girls - not less than a year after menarche) do not need a dose adjustment, but clinical experience in children (aged 10 to 17 years) is limited.

When taking Zete ® with simvastatin, you should read the dosage instructions for children from 10 to 17 years.

Several cases of overdose with Zetia® have been reported; in most cases, an overdose did not lead to undesirable events. The undesirable phenomena that were observed were not serious. In case of an overdose, symptomatic and supportive measures should be taken.

In the study with the participation of adolescents aged 10 to 17 years with heterozygous familial hypercholesterolemia (N = 248), ALT and / or AST (> 3 times the upper limit of the norm) were observed in 3% (4 patients) of the ezetimibe / simvastatin group compared with 2% (2 patients) in the simvastatin monotherapy group; these indicators were 2% (2 patients) and 0% for the increase in CK (CK) ≥ 10 times from the upper limit of the norm. Myopathy was not reported.

In this study, no liquid adverse reactions to the drug were compared.

During controlled clinical trials of monotherapy, a clinically significant increase in serum transaminases (ALT and / or AST -> 3 times the upper limit of the norm) was similar in Zetia® (0.5%) and placebo (0.3%). In studies of combined therapy, the incidence rate was 1.3% in patients concomitant with Zetia® and statin, and 0.4% in patients taking only statin. This increase was usually asymptomatic, not associated with cholestasis, and the indicators returned to baseline after the withdrawal of therapy or continued treatment.

Basic physical and chemical properties: capsule-like tablets from white to almost white with an impression "414" on the one hand.

Description of the preparation "Zeta ®" on this page is a simplified and augmented version of the official instructions for use. Before buying or using the drug, you should consult a doctor and read the annotation approved by the manufacturer. Information about the drug is provided for informational purposes only. Only a doctor can decide on the prescription of the drug, as well as determine the dose and methods of its use.